The Blue Ridge National Heritage Area serves as the steward of the living traditions of our region, protecting and promoting the distinct music, crafts, outdoors, foodways and Cherokee culture unique to Western North Carolina. Honoring the past, we make investments in rural communities for the benefit of present and future generations.

The Blue Ridge National Heritage Area was federally designated in November 2003 in recognition of the distinct character, culture, and natural beauty of the Blue Ridge Mountains and foothills in Western North Carolina.

A Region of National Significance

The Blue Ridge Mountains of North Carolina are among the oldest mountains on Earth. The landscape 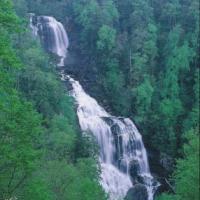 is full of superlatives: the highest mountain (Mount Mitchell), deepest gorge (Linville Gorge), and highest waterfall (Whitewater Falls) in the eastern United States; the oldest river in North America (the New River); and the two most visited National Park lands in the country (the Blue Ridge Parkway and the Great Smoky Mountains National Park). The region is also blessed with a stunning diversity of plant and animal life; more, in fact, than the whole of Europe.

But there is more to the Blue Ridge National Heritage Area than just its mountains, for out of those mountains grew a rich cultural heritage. The region is the birthplace of ancient Cherokee culture and still home to the Eastern Band of Cherokee Indians.

Beginning in the 18th century European settlers and African-Americans moved into the mountains. The relative isolation of mountain life helped these settlers nourish and preserve many traditions, especially handmade crafts.

The mountains also proved a fertile meeting ground for European and African music traditions, and over time these traditions melded to create the unique music of Appalachia.

The area has become the center of handmade art and craft in America, with a rich legacy of both traditional and contemporary craft schools and over 4,000 working craftspeople.

A land of mountain wilderness, waterfalls, Cherokee tradition, string bands, and craft studios, the Blue Ridge National Heritage Area is a place like no other.

Natural Heritage of Appalachia and the Blue Ridge Mountains