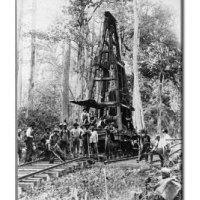 Prior to the Civil War, North Carolina had embarked on establishing a railroad line across the middle of the state that would eventually conquer the Blue Ridge Mountains and reach the Asheville area.

However, the damage done to the rails and construction during the war postponed the effort until the mid-1870s, when work on the railroad at last brought the line as far as the tiny village of Old Fort, at the foot of the Blue Ridge.

When “daylight entered Buncombe County,” as was telegraphed to the governor at the completion of the 1800 foot long Swannanoa Tunnel, it ushered in an era of new prosperity and growth to what had been an isolated mountain region. But it was not without an enormous cost in time, money, and lives. There are seven tunnels between Old Fort and Black Mountain, dug with picks, shovels, nitroglycerin and dynamite over the course of five years.  You can visit an exhibit of this feat at the Railroad Museum at the restored depot in Old Fort.

Yet another rail line dared the mountains to stop progress, the Clinchfield Railroad. The last piece was the Clinchfield loops, consisting of 18 tunnels in 13 miles of track was built beside and below what is  now the Orchard at Altapass. It was considered the ‘engineering wonder of the 20th century’ when finally done. Four thousand immigrants crowded the slopes to build the bed and tunnels. Many died in accideCrates of green apples in our packing house.nts, fights, murders.  The term “Altapass” was given to the area by the railroad, which tunnels through McKinney Gap, the highest point in the region.

The East Tennessee & Western North Carolina was a unique narrow gauge railway originating from Johnson City, TN and eventually extending to Boone, NC, a distance of 65 miles. Originally chartered in 1866 by the Tennessee General Assembly, the ET&WNC, nicknamed “Tweetsie,” was not completed from Johnson City to Cranberry, NC, until 1882, after much difficulty and years of financial challenges. To navigate the difficult Blue Ridge Mountain terrain, the road was built to a “narrow” gauge design of 3-feet rail widths rather than the American standard gauge rail width almost two feet wider. Despite the difficulties, the trip featured incredible scenic beauty.

Today, the Tweetsie Railroad theme park, based in Blowing Rock, NC, has been in continuous operation since 1957. The railroad operates on a three-mile section of narrow-gauge, which was constructed for the Tweetsie’s star locomotive, 4-6-0 #12. The locomotive is the last operating steamer of the East Tennessee and Western North Carolina Railroad.