Facing a steady increase in the population of the Blue Ridge mountains and foothills of North Carolina and changes wrought by modern technology, farmers today have blended many innovative ideas with traditional farming techniques, resulting in a diversified and strengthened agricultural economy. 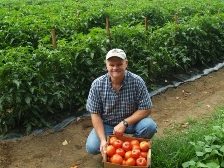 Traditional crops such as corn, tomatoes, apples, and peaches continue to be grown widely in the Blue Ridge mountains and foothills of North Carolina.

For decades, burley tobacco has been a mainstay cash crop and a way of life for mountain farmers. But rising fuel costs and the end of federal price supports have led thousands of tobacco farmers to accept the terms of a federal buyout and quit growing the crop. Many of these farmers are compensating by expanding their produce and livestock operations, while others have sought new crops to replace the tobacco that was once their mainstay.

Click below to hear a Living Traditions Moment about thermal belts in Western North Carolina. 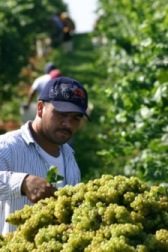 Christmas trees, ornamental trees, shrubs, and herbs, native medicinal and culinary herbs, traditional wild foods, and organic vegetables have become vital to the agricultural economy of the region. Aquaculture has increased to such an extent that North Carolina is now second in the nation in trout production.