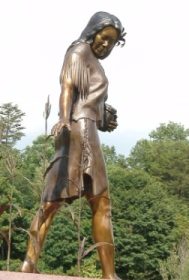 The beginning of Cherokee culture is identified with the cultivation of corn by the native people in the Southern Appalachians more than a thousand years ago.

From the earliest times in Cherokee history, the raising of corn was interwoven with the spiritual beliefs of the people. Indeed, the Cherokee name for corn—”selu”—is also the name of the First Woman in Cherokee creation stories.

Cherokee villages were surrounded by vast cornfields while gardens were planted beside rivers and streams. In addition to corn, the Cherokee grew beans, squash, sunflowers, pumpkins, and other crops. Cherokee women were the primary farmers.  “The Three Sisters” were staples in the Cherokee diet–corn, beans and squash.

After the arrival of Europeans, the Cherokee began growing peaches and watermelons acquired through trade. Cherokees began keeping and breeding horses circa 1720, and by the mid-1700s they were growing apples from Europe, black-eyed peas from Africa, and sweet potatoes from the Caribbean. Eventually, cattle were included among Cherokee livestock.

By the 1820s, due to the influence of the encroaching European immigrant culture, many Cherokee abandoned their traditional towns and were living in family groups in log cabins along streams and river valleys. Even though the land was still owned communally, the Cherokee practiced a type of subsistence agriculture on small farms usually ranging in size from two to ten acres.

Click on the link above to hear a Living Traditions Moment about the role Cherokee Agriculture played in Appalachian culture.

The Cherokee have a long tradition of using plants for healing and preventive medicine. Wild herbs and other plants were gathered carefully, with the harvester taking only the fourth plant and leaving behind a gift of gratitude, such as a small bead.

A number of books about Cherokee agricultural traditions and herbal healing are offered for sale at the Museum of the Cherokee Indian.