Known affectionately as “old time music” to the musicians who play it, traditional Appalachian fiddle, banjo, and string band music harkens back to an older time, when fiddlers played for community dances and rural life prevailed. Though it has gone through a series of revivals nationally, it never disappeared from the North Carolina mountains.

Roots from Many Cultures 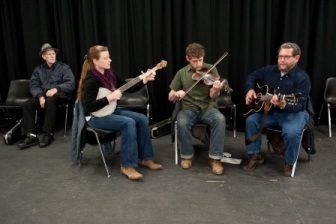 The melodic roots of old time music are found in Anglo-Irish fiddle music, while its rhythms are shaped by shuffle bowing and the banjo, both of African-American ancestry. As it evolved, old time music picked up material from other music styles such as blues, ragtime, and gospel.

In the heyday of commercially recorded old time music (mid 1920s through the early 1930s), many fine musicians from the North Carolina mountains were recorded, including J.E. and Wade Mainer, Samantha Bumgarner, Bascom Lamar Lunsford, and Frank Blevins.

Click on the link below to hear a Living Traditions Moment about the origins of the Banjo and the role it played in mountain culture.

Today, old time musicians play fiddle tunes primarily, often for dances but also in performances and in jam sessions. Old time string bands and jam sessions typically consist of fiddle, banjo, and guitar but other instruments like the bass, mandolin, and banjo-ukulele are sometimes seen.