Discover gold in the North Carolina mountains…gold and copper and bronze and vermillion and orange and a thousand variations of those hues as the rich mix of deciduous trees in these ancient mountains perform their annual autumn extravaganza.

Visitors to the Blue Ridge National Heritage Area-the mountains and foothills of Western North Carolina-can enjoy the fiery beauty from October through early November, with the trees turning first on the higher elevations. Gradually, the color show makes its way down the slopes and into the valleys and gorges.

The colors are beautiful any time of day, but the special glow of late afternoon sunlight seems to enhance the already vivid hues to best effect. In addition to mountaintop vistas, views across the open farmland on hillsides and in valleys are stunning. Many rural areas have added colorful barn quilts to buildings, which are fun to spot on a road trip.

The best way to enjoy the vistas is by getting off the main roads and onto the many scenic byways that lace Western North Carolina. The “granddaddy” of these is the Blue Ridge Parkway, which in North Carolina extends from the Virginia border south to Cherokee and the Great Smoky Mountains National Park. Soon to celebrate its 75th anniversary, the Parkway winds through both high mountains and lower elevations and offers many safe scenic overlooks along the way.

Reaching over 5000 feet in elevation, the Cherohala Skyway in the far western corner of the state is another breathtaking drive for leaf-peepers, and there are twenty-one official North Carolina Scenic Byways in the region.

Although October days are generally warm, it can get cool at higher elevations, so “layering up” is advised. Keep binoculars and cameras handy-this is the time for autumn hawk migrations. Stopping for a picnic or just to stretch your legs, you may spot a deer, wild turkey, or even an occasional black bear. Warning: do not feed the bears or try to approach them. Bears are generally docile, but can be dangerous when provoked, especially a mother bear with cubs.

In the High Country
Go in the early weeks of October to elevations greater than 5000 feet. From Asheville, take the Blue Ridge Parkway north to Mount Mitchell, highest peak east of the Mississippi River. Near Milepost 365, turn left onto NC 128 and enter Mount Mitchell State Park. Stay on 128 all the way to the top, where there is a parking lot, museum, gift shop, concession stand, and the new viewing platform. On clear days, you can see the high peaks of Western North Carolina in a 360° view.

Returning to the Parkway, travel north again. If you are interested in stretching your legs on a short hike, stop at Linville Falls, near Milepost 317. Directions to the falls are at the Visitor Center located there.

Just north of the Linville Falls Visitor Center, exit the Parkway at NC 181 to visit Grandfather Mountain which soars to 5890 feet and is one of the world’s most environmentally diverse nature preserves. The park is privately operated, and there is an entry fee, but the views are well worth the stop.

If you choose to remain on the Parkway, traveling north you will come to one of the country’s most outstanding engineering achievements-the Linn Cove Viaduct, which was built as a “bridge around the mountain” in order to cross the environmentally fragile Black Rock area of Grandfather Mountain. The viaduct can be viewed from below at the Linn Cove Visitor Center, Milepost 304, on the south side of the viaduct.

Further on, the Julian Price Memorial Park, near Milepost 300, has a beautiful lake that reflects the autumn colors and makes for a great photo opportunity. A 2.3 loop trail around the lake leads into an oak forest and puts visitors in the heart of the color.

At Milepost 294, take time to visit the stunning Moses Cone Manor and Memorial Park. The Parkway Craft Center, located in the manor, is filled with high quality crafts made by members of the Southern Highlands Craft Guild.

Exit the Parkway about 2 miles north of the Cone Manor, and visit the charming village of Blowing Rock, which boasts great restaurants and shopping.

Through Waterfall Country
This drive combines a stretch of the Parkway with a portion of the North Carolina Scenic Byway known as the Waterfall Byway, so named for the 200 waterfalls that surround the route as it winds for 98 through the far western part of the Blue Ridge National Heritage Area. Various elevations make this a good leaf-peeping drive in mid-October.

Leaving Asheville, travel south on the Parkway, stopping first at Mount Pisgah, elevation 5721 feet. An ideal place to experience breathtaking scenic vistas is the Pisgah Inn restaurant, which is open for breakfast, lunch and dinner, with a wall of windows that offer a dramatic panorama of the mountains to the south.

Further along the Parkway southbound, stunning views can be had from Looking Glass Rock, Graveyard Fields and Devil’s Courthouse overlooks. If you’re up for hiking, you will discover three waterfalls along the trails of Graveyard Fields.

Just past the Devils Courthouse, turn south onto NC 215 and travel to Rosman. The Waterfall Byway begins at the intersection of U.S. 64 and NC 15. Turn right onto US 64, and over the ensuing miles you will come across some of the most beautiful waterfalls in the Blue Ridge National Heritage Area: Toxaway Falls, Bridal Veil Falls, Dry Falls, and Cullsaja Falls. En route, you will pass through the communities of Sapphire, Cashiers, and Highlands, each with its own special charm and history.

To shorten the tour, at Franklin, take US 441/23 to Dillsboro and Sylva, then follow 23/74 to return to the Blue Ridge Parkway. Or continue to the end of the Waterfall Byway which ends in Murphy.

In the Foothills
Later in leaf season, fall color brightens at lower elevations, and can be viewed by traveling other North Carolina Scenic Byways, such as the Black Mountain Rag. Popular as a short day trip, this road runs between the town of Black Mountain and Bat Cave along the curving, winding NC Highway 9. Bat Cave is named for a nearby cave that is habitat for the rare and endangered Indiana bat.

A visit to Hickory Nut Gorge, Chimney Rock and Lake Lure is just a short detour off the Black Mountain Rag Scenic Byway. At Bat Cave, turn left and follow US 64/74A/NC 9 East. Hickory Nut Gorge was carved by the Broad River, which runs to the right of the highway and is popular with waders in hot weather. The gorge is 14 miles long and drops about 1,800 feet along the way.

One of the best known attractions in the Gorge is Chimney Rock Park. The “Chimney” is a stunning 500-million year old geological formation from which visitors enjoy the spectacular 75-mile views. The 404-foot Hickory Nut Falls that is on park property is visible from the highway. The Park and Hickory Nut Gorge provided the backdrop for the movie Last of the Mohicans.

Past Chimney Rock you will come to placid Lake Lure, with a sandy swimming beach, restaurants, boat tours, and a marina. The movie Dirty Dancing was filmed at Lake Lure.

To return to the Black Mountain Rag Scenic Byway, backtrack to the intersection of US 64/74/NC 9 and turn left toward Hendersonville. For the next six miles, you will pass through some of the region’s finest apple orchards. This Scenic Byway ends at Mill’s Gap Road. 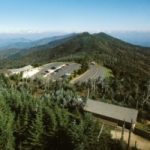 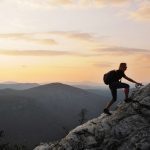 Linville Gorge is the deepest and perhaps most rugged gorge in the eastern United States....
Learn More
Add to Trip 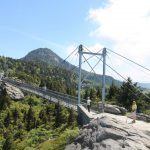 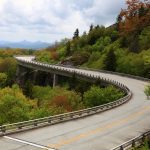 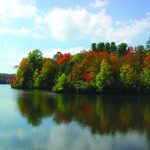 Julian Price Memorial Park is a popular stop on the Blue Ridge Parkway at the...
Learn More
Add to Trip 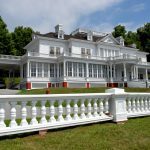 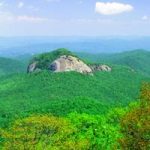 The sheer face of Looking Glass Rock, located in the Pisgah National Forest near Brevard,...
Learn More
Add to Trip 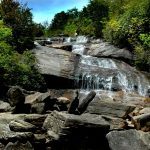 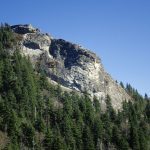 A prominent landmark of legend on the Blue Ridge Parkway, the Devil's Courthouse presides over...
Learn More
Add to Trip 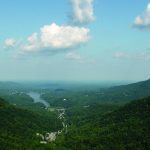 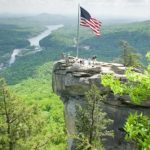 Some of the Best Views in the North Carolina Mountains Chimney Rock State Park represents...
Learn More
Add to Trip

We encourage you to explore the scenic beauty and interesting small towns that are adjacent...
Learn More

Explore Linville Falls from the Parkway

We encourage you to explore the scenic beauty and interesting small towns that are adjacent...
Learn More

Discover gold in the North Carolina mountains...gold and copper and bronze and vermillion and orange...
Learn More

Visit Galleries, Studios and the Nationally Acclaimed Penland School of Crafts Whether you're a collector,...
Learn More

Some of the most beautiful rolling hills and deep mountain valleys in North Carolina's Blue...
Learn More

Start in downtown Asheville with a visit to the Thomas Wolfe Memorial.  This 28-room...
Learn More

See the Traditions of Appalachian Arts and Crafts

Take a craft journey north of Asheville to enjoy some of the quaint small...
Learn More

When traveling north, this route offers visitors a chance to visit the town of Spruce...
Learn More