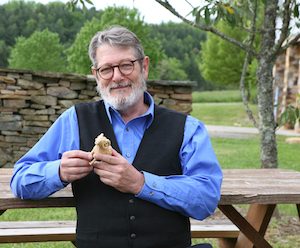 The work and legacy of Davidson has resulted in a newfound success of this Danish-inspired folk school, tucked away in a corner of the North Carolina Blue Ridge Mountains in the heart of Southern Appalachia. John C. Campbell Folk School provides enriching experiences in non-competitive learning and community life that are joyful and enlivening. It is in this spirit and philosophy that Davidson has been the catalyst for the school evolving from a seasonal crafts school to a true year-round folk school, a place for learning that does not involve competition.

Davidson, an accomplished writer, musician and speaker, embodied the ideals of the school when he first came in 1992. Under his leadership the school has more than doubled its enrollment—from 2500 students to 6,000 annually—and has become a year-round institution, increasing classes from 150 to 864 offerings each year. Davidson’s vision and determination have helped establish the school as one of the best in the country, transforming the institution into a community and a work place offering sustainable and viable year-round employment and benefits for its employees.

“Jan embodies everything that is wonderful and magical about the Folk School,” said Trudy Strawn, president of the John C. Campbell Folk School Board of Directors. “He represents the true spirit of the school, heart and soul…he spins a fun tale, fiddles a fine tune, and weaves magic into the fabric that makes the Folk School one of the happiest places on earth.”

Over the past quarter century, Davidson has been instrumental in the planning, designing and construction of new student housing as well as seven new studios for cooking, blacksmithing, painting, woodturning, book and paper arts, spinning and music. He also helped establish conservation easements, create bird and wildlife sanctuaries, construct new walking trails and preserve the natural beauty of the 300-acre campus.

Davidson has also worked tirelessly to preserve the robust history of the school, establishing the History Center and the Fain Archives. He led renovation efforts to restore several historic buildings on campus, including Hill House, Keith house, Francis Whitaker Blacksmith Shop and Tower House. With a focus on green building practices, Davidson oversaw design and construction of the Energy Star© certified Field House, a student housing facility. In addition, Davidson installed informative displays and interpretative kiosks around campus, reinforcing the rich and historic significance of the property.

A stalwart advocate for the arts, Davidson has served on many committees and regional boards including the North Carolina Arts Council. He received The North Carolina Award for Fine Arts, the state’s highest civilian honor, in 2007. Davidson was also instrumental in the completion of the school’s first major capital campaign and the establishment of the John C. Campbell Folk School Endowment.