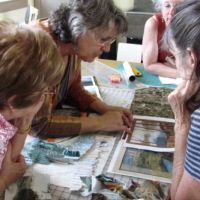 In 2010, the Blue Ridge National Heritage Area awarded the Stecoah Valley Arts, Crafts & Educational Center a grant in the amount of $22,000 to offer classes, demonstrations, and workshops in Appalachian and Cherokee cultural arts, including arts/crafts, culinary subjects, textiles, and music/dance, while simultaneously preserving Appalachian cultural heritage. The secondary objective was to increase cultural/heritage tourism and agri-tourism to the area.

Over 100 Classes the First Year

The original plan for this stand-alone project (classes have been offered since 2007 as part of other programs) was to offer 50 classes during the first year, but the program proved to be so popular that over 100 classes were offered, serving over 400 participants. Classes included basket weaving, rug braiding, loom weaving, quilting, banjo, and flat foot dancing.

In addition to preserving traditions of Southern Appalachian culture, the project helped sustain existing jobs at the Center, and provided local artists with another source of income through class instructor fees and increased gallery sales. It also supported area resorts, lodging and restaurants by providing additional activities for their guests and the visitng public. During the project period, the Center opened the Schoolhouse Cafe, an expansion of the Center’s Kitchen Project, which was an immediate success.

The Center received the “Mountain Heritage Award” from Western Carolina Univeristy  for its programs that preserve the culture of the Southern Appalachian mountains.