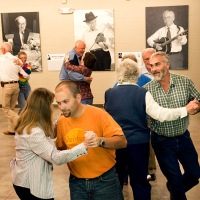 The grant supported the creation of larger-than-life-sized portraits of nine “giants” of old-time music in Surry County who were highly influential in the perpetuation and revitalization of old-time music across the country. The grant also funded audio presentations which accompany each portrait so visitors can hear the musicians play and talk about their music in their own words.

Opened to the public in March, 2010, the hall has attracted thousands of visitors and has served as a community hub for concerts, dances, and the local Junior Appalachian Musicians program. A second BRNHA grant awarded in March, 2011 is supporting an increase in capacity to serve larger school groups and group tours as well as the design of exhibits to showcase artifacts.

In February, 2012, the Surry Arts Council moved the Heritage Hall to the downtown Earle Theatre where it will receive increased exposure.