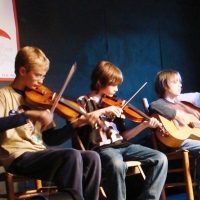 In the spring of 2000, guidance counselor and musician Helen White started the Junior Appalachian Musicians (JAM) program, an after school program in Alleghany County to provide kids with the opportunity to learn traditional music from musicians in their community. The program was so successful that arts organizations and school systems in many Western North Carolina counties sought to establish their own programs.

Two BRNHA grants in 2007 and 2009 to the Black Mountain Center for the Arts helped to launch similar programs in Buncombe, Madison, and Mitchell Counties. All three programs are going strong today.

In June, 2011, BRNHA awarded a grant to Transylvania Youth Strings to launch a Junior Appalachian Musicians program at the Transylvania Boys and Girls Club.