Stabilization and Rehabilitation of the Historic Carson House Barn 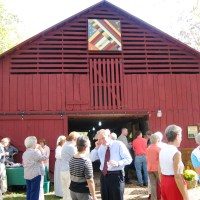 A Blue Ridge National Heritage Area grant supported the stabilization and rehabilitation of an early 20th century barn on the Carson House property.

Historic Carson House completed the work in late 2009 and created space in the barn for a display of drawn vehicles and an exhibit of 19th century farm life artifacts. The farm life exhibit opened to the public in October, 2010 and is especially popular with school groups.