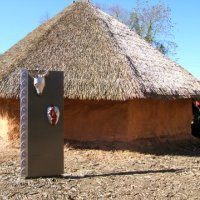 An initial BRNHA grant supported the creation of a Cherokee winter house, a centerpiece of a larger outdoor exhibit that portrays a typical Cherokee homestead from late 16th century to the 18th century. Located in downtown Hayesville next to the Clay County Historical and Arts Museum, the Nelson Heritage Park opened to the public in October, 2010, and has since drawn thousands of visitors.

CCCRA partnered with Eastern Band of Cherokee Indians and Western Carolina University to ensure authenticity and develop education programs for schoolchildren, college students, and the general public. A second BRNHA grant awarded in February, 2010 is helping CCCRA develop curriculum materials and special events to strengthen the site’s use as an outdoor classroom.