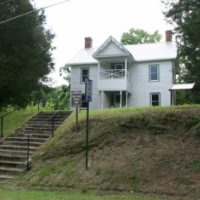 Established in 1789, the town of Rockford served as the county seat of Surry County until is was encompassed into present day Yadkin County. As an early seat of government Rockford developed as an earl seat of commercial activity in the area. Hotels, taverns, and retail stores along with craftsmen including a blacksmith and tinsmith as well as industry including a forge and tannery flourished in the town.

A notable resident of the town during the 19th century was Judge Richmond Pearson, who established a law school just across the Yadkin River (Richmond Hill Law School). Pearson served as Chief Justice of the North Carolina Supreme Court from 1858 until his death in 1878.

After a period of decline Rockord saw success and a resurgence in the coming of the railroad in 1890 and through the early 1900’s. Rockford became the chief carrier of passengers, freight, and mail for Northwestern North Carolina Railroad and as a result resurfaced as a commercial center. During this time the village boasted three general stores and tobacco factory.

Modern Rockford still maintains much of its early character as several buildings of architectural significance still stand in town. These include, the Rockford Inn, the Rockford Methodist Church, the Mark York Tavern, the Rockford Post Office, the Dudley Glass Store – Davenport Galley, and the Rockford Masonic Lodge.

In September the town hosts the Rockford Reunion, (this year’s event is on Sept. 8th) at the Masonic Lodge from 10 AM to 4 PM. The day’s activities will include traditional music, a BBQ lunch, sharing of family and local history, and dedication of the new Whitaker/York marker and hand rails donated by Bob and Betty Whittaker and several other Whitaker and York families. Registration fee for the day is $10.00 which includes lunch.

Each year the town hosts the annual Candlelight Christmas in Rockford event at the Rockford Methodist Church. Be sure to stop by the Dudley Glass Store and Davenport Gallery to do some Christmas shopping before the event!