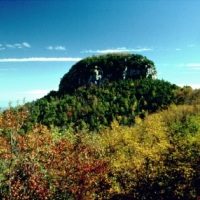 Rising 1,400 feet above a rolling plain, Pilot Mountain served as a landmark for both Native Americans and pioneer travelers. The mountain was known to the native Saura Indians as “Jomeokee,” the “Great Guide” or “Pilot.” Today, it is a 3,703-acre State Park.

A seven-mile woodland corridor joins two sections of the Pilot Mountain State Park, each section offering a variety of opportunities for outdoor fun. The mountain segment, which includes the two pinnacles, contains most of the visitor facilities. The more primitive river section centers around the meandering Yadkin River.

Pilot Mountain State Park is a popular destination for canoeing, fishing, horseback riding, picnicking, and rock climbing. The two-mile portion of the Yadkin River that flows through the park is one of the most scenic stretches along the river’s course. The segment is part of the 165-mile Yadkin River Canoe Trail which follows the course of the river, passing through five reservoirs to the confluence of the Yadkin and Uwharrie rivers. Canoe rentals are not available at the park.

Anglers can reel in sunfish, crappie, and catfish. They’ll need a state fishing license and must obey the regulations of the NC Wildlife Resources Commission.

Rock climbing and rappelling are favorite activities at Pilot Mountain for experienced climbers. Climbing is permitted only in designated areas. Climbers must register with the park by obtaining a permit at the park office.

Pilot Mountain is known to geologists as a quartzite monadnock, a lone survivor of the erosion of millions of years that wore the surrounding peaks of the ancient Sauratown Mountains down to flat lands. Pilot Mountain is capped by two prominent pinnacles from which visitors can see across hundreds of miles of the Piedmont and to the mountains of North Carolina and Virginia.

Pilot Mountain was mapped in 1751 by Joshua Fry and Peter Jefferson, father of President Thomas Jefferson. Pilot Mountain was the likely inspiration for “Mount Pilot” in Andy Griffith’s television show. Griffith was born in the nearby town of Mount Airy, which was the model for the small town of Mayberry in the show.

Horne Creek Farm is a State Historic Site is adjacent to the Yadkin River section of Pilot Mountain State Park where visitors can learn about rural life in the past. Currently being restored to appear as it did in 1900, the farm is an educational center offering hands-on experiences for visitors.

The Park is closed on Christmas Day.

There is no charge for admission to the park. Various fees are charged for camping.