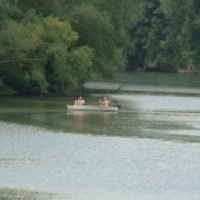 The Nolichucky River, near Spruce Pine, North Carolina, is considered one of the most spectacular whitewater rafting destinations in the eastern United States. This isolated river is flanked by one of the steepest and most beautiful gorges in North Carolina. Over 25 named Class III-V rapids test rafters’ skills as the river winds through the Pisgah National Forest and Cherokee National Forest.

This natural flow river, created at the confluence of the Toe and Cane Rivers, provides a 10-mile run of exhilarating whitewater adventure, especially during the high waters of early spring. The dogwoods and redbud are in bloom at this time of year as well.

Fishing for muskellunge and smallmouth bass is also reported to be excellent for those who dare to wade the rushing waters.

Although numerous commercial outfitters and rafting companies offer guided whitewater adventures on the Nolichucky, its remote location prevents it from being heavily used. One of the few signs of civilization pointed out by local river guides are the crumbling foundations and chimneys of what is believed to be the “Lost Cove Settlement,” which according to legend was used as a hideout during the Civil War.

From Spruce Pine, take NC 226 north past Red Hill and turn onto NC 197 north. The river can be accessed from several points along the way, including the Poplar Boat Launch at Poplar.