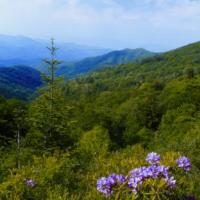 The Nantahala National Forest anchors the far southwestern corner of North Carolina with over 528,000 acres of protected forest and high mountain wilderness. Within the National Forest, the Nantahala River flows through a gorge so lush that it only gets direct sunlight at mid-day. Nantahala is Cherokee for “land of the noonday sun.”

Adjacent to the Great Smoky Mountains National Park, the Nantahala National Forest is the largest of the four National Forests in North Carolina. Within its boundaries are three designated Wilderness Areas and two Wild and Scenic Rivers.

Much of the Nantahala National Forest can be enjoyed from the highway. Both the Waterfall Byway and the Cherohala Skyway wind through its hardwood forests, across mountain ridges, and alongside river gorges.

The Nantahala River provides excellent rafting, canoeing, and kayaking and is one of the most popular whitewater rivers in the country. Three picturesque reservoirs are nestled among the mountains in the Nantahala National Forest, offering boating, water-skiing, fishing, swimming, and camping.

Hikers can enjoy miles of developed trails, including the Appalachian Trail and the Bartram Trail, as well as backpacking in the wilderness. Horseback riding and mountain biking are also popular.

The Nantahala National Forest is distinguished by a number of treasured natural attractions:

Chattooga River Gorge – a Wild and Scenic River
Cullusaja River Gorge – a spectacular scenic drive along the Mountain Waters Scenic Byway
Joyce Kilmer Memorial Forest – preserves one of the largest stands of old growth trees in the eastern United States
Little Tennesssee River – one of the best-preserved, free-flowing rivers in the North Carolina mountains
Nantahala River Bogs – some of the few remaining bogs in the North Carolina mountains
Panthertown Valley – a unique landscape nicknamed “the Yosemite of the East”
Wayah Bald – a unique landscape feature and popular hiking destination
Whiteside Mountain – site of the highest sheer cliffs in the eastern United States

Nantahala National Forest is served by four ranger districts. For maps and further information, contact the Supervisor’s Office or one of the four district offices directly: