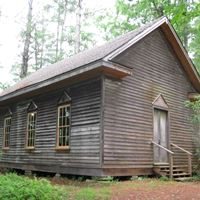 The historic McGaha Chapel was finished in 1872 during the difficult Reconstruction period following the Civil War in the context of multiple families that had been split in loyalty, fighting on different sides. The earliest membership roll shows not only Methodist but also other church members, underlining the ecumenical nature of the community.

In southern Transylvania County, along the Greenville Turnpike, James Crafford McGaha, along with other men in the area, constructed a small sturdy structure originally known as the Dividing Ridge Church, later as The Little River Methodist Episcopal Church and finally commonly known as the McGaha Chapel.

McGaha was known for his generosity and operated a free way station for drovers and their animals between upper Transylvania, Jackson and Haywood counties and Greenville, SC. The church was conveyed to the trustees of the church by A. J. and Margaret Loftis in 1883. The deed read “to be used, kept and maintained as a place of divine worship for the use of the ministers and membership of the Methodist Episcopal Church.”

The McGaha Chapel served the needs of the community for over 50 years, but as manufacturing plants opened and the arrival of the automobile drew the people into town, the little church on the knoll was abandoned. The Western North Carolina Methodist Conference turned over responsibility for the Chapel to the First United Methodist Church of Brevard in 1972.

Interest in the Chapel increased over the years as various services, meetings and reunion events were held. Restoration work was done by the Brevard First United Methodist Church, Cedar Mountain residents and other local residents. The Brevard First United Methodist Church deeded the McGaha Chapel to the Transylvania County Historical Society in 2007. Restoration efforts continued by the Society and Cedar Mountain residents.

The pristine chapel remains essentially as it was in 1872. It has some of the original hand-pressed glass windows, weatherboard siding, front-gable roof and boxed eaves; the Chapel rests on stacks of field stones. The hand-made pews made of single boards demonstrate the very large trees sawn by the local builders. The simple pulpit and mourner’s bench, and probably the pews, were crafted by A.J. Loftis.

It was an active congregation until about 1930 when available transportation allowed commuting to Brevard. Some modifications such as a chimney have been removed, and the building has been restored to its original state (adding only a few safety items and some replacement wood). Transylvania County designated the McGaha Chapel as a Local Historic Landmark in 2013.

For 140 years the McGaha Chapel has served as a symbol of bridging painful differences and healing through gathering.

The Chapel is open for visitors by special appointment. Call the Society’s office at 828-884-5137 and leave a message for appointments.