A Town Born From Education

Before 1856, when no more than 10 families lived on what was then known as Pleasant Hill, education was important to the parents who founded an academy to educate their children.

The French Broad Baptist Institute, as it was known, eventually evolved into Mars Hill College. When the village of Mars Hill was incorporated in 1893, the corporate limits were set at 900 yards in all directions from the northwest corner of the first college building.  The name Mars Hill is said to have been inspired by a Biblical passage, Acts 17:22, which says, “Then Paul stood in the midst of Mars’ hill and said, ‘Ye men of Athens, I perceive that in all things ye are too superstitious.’”

As the college grew, so did the town. A general store was built, a doctor’s office established, and boarding houses opened for college students. The year 1913 was a boom year for the growing community. Several new buildings were erected, including two stores, a bank building, general store, and a drug store. Many of the homes and the businesses built during this time can be seen in Mars Hill today.

Mars Hill University served the academic needs of a growing community and became one of the premiere two-year private colleges in the nation. In 1962, it reached four-year status, and in 2013, the institution changed its name to Mars Hill University to reflect the institution’s expansion, both in terms of enrollment and variety of offerings. The school identifies itself closely with the history and culture of this area and the wide Southern Appalachian area.

The college and the town itself are inextricably linked to the traditional music of Appalachia. Musician, folklorist, and festival organizer Bascom Lamar Lunsford, a Mars Hill native, dedicated his life to collecting and promoting the music of the Southern Appalachians. Through his work he became known as “Minstrel of the Appalachians.”

In 1927 Lunsford organized the Mountain Dance and Folk Festival in Asheville, which has been in existence ever since. He organized many other festivals, performed extensively, and composed songs, including the famous “Mountain Dew.”

The Rural Heritage Museum is on the campus of Mars Hill University. Its exhibits and programming focus on educating students and visitors to the lifeways of the Southern Appalachians. Open year-round, 11 am to 5 pm, except Mondays, and Thanksgiving, Christmas and New Year’s days.

The Liston Ramsey Center for Regional Studies is in the Renfro Library on the campus. The extensive collection of photographs, manuscripts, sound recordings, and artifacts document aspects of mountain life and culture, including an exhibit of Cherokee artifacts, some of which date back to 10,000 BC. Bascom Lamar Lunsford’s instruments are on display along with an extensive scrapbook of his writings and manuscripts to rival the one in the Library of Congress.

Southern Appalachian Repertory Theater (SART)—Presents the mainstage summer season of productions each year in the historic Owen Theatre on the campus of Mars Hill University.

Whether presenting Broadway musicals or world-premiere original works, SART offers the highest quality professional productions, with one play each season which has a special emphasis on the rich culture and heritage of the people of Appalachia.

Blackberry Festival—Held annually in August, celebrating some of the finest blackberries grown anywhere.
Bascom Lamar Lunsford Festival—Held the first Saturday in October, in conjunction with the Heritage Festival. Both festivals are on the campus of Mars Hill University, and both celebrate the traditional music, crafts, and cuisine of the region.

Mars Hill can be reached from both North Carolina and Tennessee via US 25 and Interstate 26. 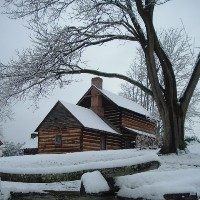