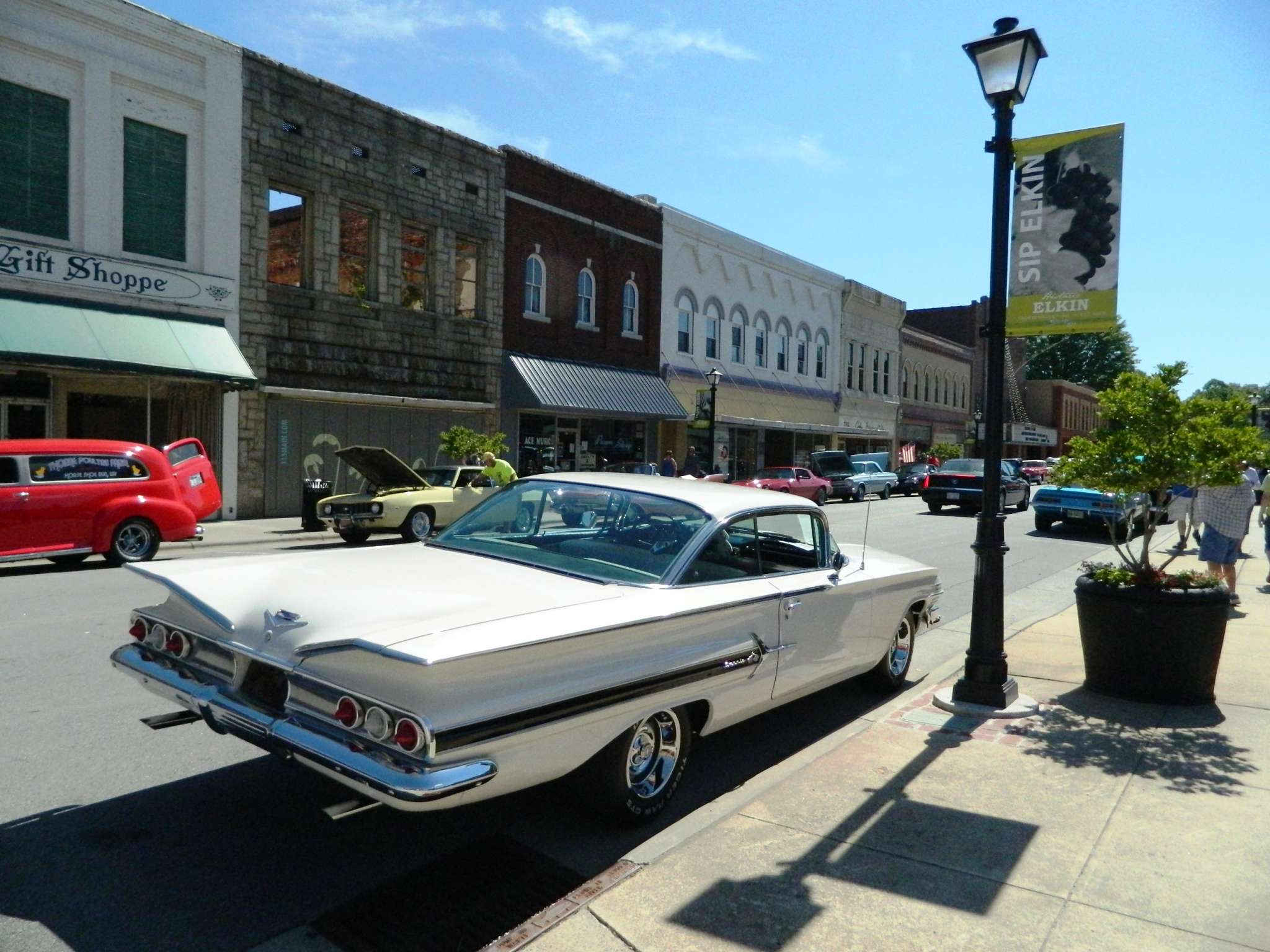 The confluence of the Yadkin River and Big Elkin Creek in North Carolina’s Blue Ridge mountains has drawn people to the site of what is today’s city of Elkin since the coming of the Paleo-Indians 10,000 years ago. Records show that the Sioux Indians settled along the Yadkin River as early as 500 B.C.

Around 1840, Richard Gwyn left Jonesville to settle on the north side of the Yadkin River, recognizing the value of the forested hills and water power of the Big Elkin Creek. Within a decade, he and several family members established Elkin Manufacturing Company, a cotton mill which continued to operate during the Civil War, producing fabric for Confederate uniforms. Most early Southern textile mills were damaged or destroyed during the war, but Elkin’s mill survived intact and remained fully operational.

Further up Big Elkin Creek, Alexander Chatham and Thomas Lenoir Gwyn opened a woolen mill in 1877 that grew and became Elkin’s largest industry. The Northwestern North Carolina Railroad arrived in 1890, and Elkin was poised to take the opportunities the railroad brought for commercial and industrial expansion. Elkin’s history includes the Revolutionary War and the Civil War, the Second Industrial Revolution, and the Elkin and Alleghany Railroad.

Listed on the National Registry of Historic Places, Elkin has embraced its history and added a touch of sophistication. Visitors can hike the Overmountain Victory National Historic Trail, the E&A Rail Trail, shop in one-of-a-kind specialty stores, experience fine dining, explore murals, paddle the Yadkin River, and enjoy an exhibit at the Foothills Arts Center or a live music show at the newly renovated Reeves Theater on Main Street. Elkin’s Main Street is now directly along the NC Mountains-to-Sea Trail as well.

Elkin is located within twenty minutes of forty wine tasting rooms, all within North Carolina’s first federally recognized American Viticulture Area – the Yadkin Valley Wine Region (AVA), including The Wisdom Table in Historic Downtown Elkin with on on-site sommelier. Elkin also offers a wine hopper shuttle, called the Elkin Vine Line, which is based out of the new Heritage & Trails Center at 257 Standard St, adding to your viticulture experience.

The Arts, Galleries and a Museum

The Foothills Arts Center is home for the visual and performing arts in the foothills of the Blue Ridge Mountains. They also offer fiber art classes from the Yadkin Valley Fiber Center, both located in their new location at 321 E Main St.

The Richard Gwyn Museum – Elkin’s founder, Richard Gwyn, built Gwyn School-Elkin Chapel around 1850. The building is the oldest in Surry County to have been used as either a church or school. The Jonathan Hunt Chapter of the D.A.R. converted it to a local history museum and items on display include farm tools, domestic artifacts, textiles, a weaving loom, photographs, and documents.

Downtown Elkin is also on the Appalachian Mural Trail, and the Blue Ridge Music Trail.

The Reeves Theater is a newly renovated live music venue, farm-to-table restaurant, and bar. It seats 275 with a state of the art sound system and offers live music 4 nights a week. The Reeves was built in the art deco style, and the front façade was fully restored, however the interior was fully rebuilt to accommodate its new use.  The Reeves also plans on opening the Downtown School of Music, offering a variety musical instrument instruction, voice, music theory, and songwriting lessons.

Elkin Municipal Park is a 25-acre Park with three ball fields, eight lighted tennis courts, a mile long scenic walking loop, a playground, two picnic shelters and a band shell, as well as an outdoor swimming pool that is open to the public during the summer months. It also includes miles of newly groomed walking/bike trails (the E&A Rail Trail) and 7 miles of mountain bike trails. Along this trail you can also fish for trout, birdwatch, read history panels, ring a gong, enjoy a picnic, and more. This trail will eventually connect 22 miles of off-road hiking trails from downtown Elkin to Stone Mountain State Park. You can also drive to Carter Falls for a short hike to the waterfall, or to Grassy Creek Vineyards for some gorgeous trails and a new forest bathing trail (no electronics please!). An RV park is also situated next to Carter Falls with RV and primitive camping for MST hikers.

Crater Park has a ball field, multipurpose field and Yakin River Access with a public boat ramp. There is also a dog park nearby.

Overmountain Victory National Historic Trail – Elkin is the eastern trailhead for the Overmountain Victory National Historic Trail, one of only 15 such trails in the nation. This trail commemorates the journey of the “Overmountain Men” who traveled from Tennessee, Virginia and North Carolina, and fought and defeated the British at the Battle of Kings Mountain. The Wilkes/Surry Patriot Militia mustered in present day Municipal Park on September 7, 1780. The Patriots, along with their Tory prisoners, traveled back through Elkin after the victory at Kings Mountain. Elkin is the only location the Patriots gathered and came back through after the victorious battle. The mustering field is located at the Elkin Municipal Park, and the official trail heads south along Big Elkin Creek where it crosses W Main Street in downtown.

Yadkin River Trail – Paddling, fishing and bird watching can all be enjoyed on this section of the 165 mile river trail, rich in natural beauty and American history. Access the river at the boat ramp at Crater Park. Elkin is also serviced by 6 kayak/canoe outfitters in the area.  There is also an RV Park within a mile of downtown Elkin.

Leaf-to-Vine Scenic Byway – 65 miles of farmland, foothills and mountains with interpretive sites tell the story of how the local communities have been impacted by agriculture, how tobacco farms have become wineries, and the region’s connection to NASCAR. This North Carolina Scenic Byway begins and ends at the intersection of North Bridge Street and Market Street in Historic Downtown Elkin.

Friendship Speedway is a 4/10 mile dirt track that runs on Saturdays throughout the year.

The Big Elkin Brewfest is held annually, showcasing unique craft beers from all over North Carolina.

Big Elkin Roots Music Fest is held in June and features an assortment of roots, folk, country and blues music.

NC Trail Days Festival, a 3-day event, is held in the first weekend of June.

Take a Break from the Interstate is a 100-mile long road market along US Hwy 21, which intersects downtown Elkin. It’s held the last full weekend in July.

Reevestock Music Fest is a 2-day event held during the first weekend in August.

Light up Elkin, held during the first Friday in December, offers craft market, dancers, train rides, a visit with Santa, and downtown shops decorated for the holidays and open late.

The Elkin Farmers Market is held every Saturday in the Elkin Town Hall parking lot located at 226 North Bridge Street from mid-April through November. Hours are 9:00 a.m. – noon. Live music is provided every Saturday. There is a market shelter on site with public restrooms.