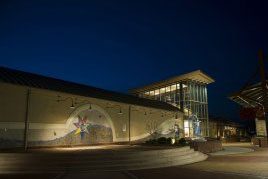 Hear some great guitar picking and learn how the artists make their music at the first Blue Ridge Music Trails “Traditions Concert”, Sunday, September 15, at 3 PM at the beautiful Willingham Theater at the Yadkin Cultural Arts Center in Yadkinville, NC.  This concert features “Guitar Styles of North Carolina.”

The “Traditions” concerts are part musical performance, part storytelling, and part learning experience for the audience as musicians demonstrate their style of playing, tell the history of how they developed their techniques and share stories from their music experiences.

This two-hour concert will feature the guitar styles of some of our region’s most talented and entertaining musicians.  The lineup includes The Harris Brothers, Josh Goforth and Laura Boosinger.

The Harris Brothers
Reggie and Ryan Harris were born into a musical family in the foothills of western North Carolina and have been playing and singing since they were children. Known for their traditional blues stylings, this popular duo plays Bluegrass, swing and serious country music as convincingly as Etta Baker or George Jones. You can find them in Happy Valley, your local acoustic music venue or at The Minnesota State Fair. Check out the lastest issue of WNC Magazine featuring the Harris Brothers!

Josh Goforth
Josh’s musical prowess became evident when he started playing the piano in church at the age of four. A relative loaned him a guitar at 14 and he became a regular at jam sessions in Madison County. The youngest fiddler to be deemed a Master Fiddler at Fiddler’s Grove as well as an expert flatpicker in the style of Doc Watson and a devotee of Merle Travis fingerstyle guitar, Josh always delights with his skill and enthusiasm.

Laura Boosinger
Laura is what is called in these mountains “an all-day talker.” She will be serving as host and part-time banjo player for this show. Laura first picked up her banjo while attending Warren Wilson College in Swannanoa, NC, which proved to be the beginning of an acclaimed career as a traditional musician. She performs solo and with other musicians regionally and abroad, and has numerous recordings.

Get Your Tickets Now!