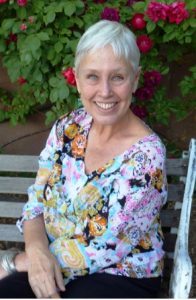 Ronni Lundy, award-winning author of the handsome cookbook Victuals: An Appalachian Journey, with Recipes, will be our featured speaker at Gather ‘Round the Blue Ridge 2017.

Our annual meeting with partners from across the region will be 9:30 a.m. – 2 p.m. Thursday, Sept. 7 at Highland Event Center,12 Old Charlotte Highway, Asheville. Registration starts at 9:30 a.m. with a continental breakfast.

In her introduction, Lundy explains how to pronounce the book’s title. “Victuals. Say it the way my people have for centuries: vidls. … Look that word up in your dictionary. It turns out my people, the people of the southern Appalachian Mountains, have been right about victuals all along. About the way you say them, the way you raise them, the way you cook them, keep them, and share them. About saving seeds, and working the land, and simmering pole beans, and making real cornbread.”

Where Appalachia is too often stereotyped, Lundy takes a deeper look at the region’s complexity from native crops to newcomers bringing in new tastes and takes on old favorites.  In her essays and 80 different recipes, Lundy offers the ingredients and the stories behind such favorites as Ginger Bean Chowchow, Buttermilk Brown Sugar Pie, Braised Greens & Pot Likker, Skillet Fried Chicken & Milk Gravy, and Icebox Green Strawberry Pickles.

At Gather ‘Round, we’ll be sharing our region’s success stories from the year such as the popular Blue Ridge Music Trails, and look forward to exciting new initiatives ahead, including the development of Blue Ridge Craft Trails of Western North Carolina. Stay tuned for gift ideas and getaway packages that you can bid for in the silent auction.