Concerts at the Rock: The Malpass Brothers & Carolina Blue 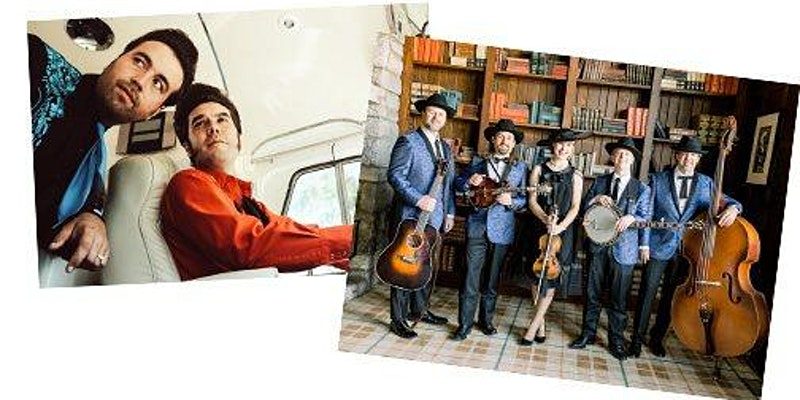 Carolina Blue is a Brevard, NC based band whose roots run deep in the tradition of Bill Monroe. The band was formed in 2007 after the release of the album Nothing So Blue by Bobby Powell and Tim Jones. Carolina Blue won the South Carolina state bluegrass championship at RenoFest in 2011. They also received their first Vocal Group of The Year Nomination at the 2018 SPBGMA Awards Show. They have appeared on the hit TV show “Song Of The Mountains” as well as “The Bluegrass Trail” series on RFDTV. The band’s repertoire consists of original songs, many bluegrass favorites, and gospel, too, all done in the traditional style. Their most recent Pinecastle Records release, I Hear Bluegrass Calling Me, debuted on Billboard’s Top 5 Bluegrass Albums chart, has just recently made its debut on the National Bluegrass Survey’s Top 15 Albums chart, and has produced their #1 hit song, “Rusty Rails.” Band members are Bobby Powell on guitar and vocals, Timmy Jones on mandolin and vocals, Reese Combs on upright bass and vocals, James McDowell on banjo and vocals, as well as American and Canadian Grand Master Fiddle Champion, Aynsley Porchak on fiddle, a recipient of the 2018 International Bluegrass Music Association’s Momentum Instrumentalist Award.

As young boys, Christopher and Taylor Malpass soaked up the music of their granddad’s phonograph records. Christopher earned his first talent show trophy at age 7, and Taylor was playing mandolin by the time he was 10. Today, they promote the work and music of classic country artists they treasure while creating new music and making their own mark in the lineage of a rich American cultural heritage.

With sincerity, honesty and an utter ease on stage that belies their years, their smooth vocal blend and skillful musicianship layer infectiously into the deep respect they pay to legends who have paved the way. Add the funny, off-the-cuff quips between the two 20-something siblings, and the engaging concert becomes a magnetic time-traveling journey to when a calmer rhythm reigned supreme.