Concerts at the Rock: Merle Monroe 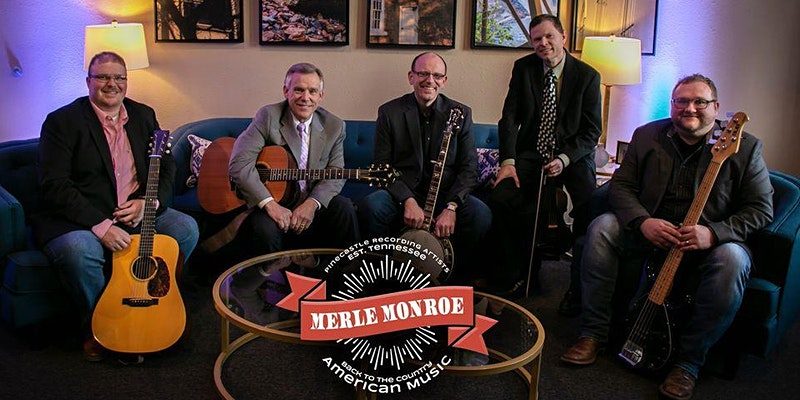 Combining the musical styles of the Father of Bluegrass with the Okie from Muskogee is an exciting proposition. Feeling that “Bluegrass and Traditional Country music is America’s music, the stories of the common man and the sounds of the mountains,” Tim Raybon and Daniel Grindstaff have formed the new band Merle Monroe.

With the goal of choosing songs that relate to everyday life and go “back to the country,” they, along with bandmates Derek Deakins, Eli Johnston and Josh Doss, hope to take your mind away from today’s current distractions on their new self-titled project for Pinecastle Records. They have worked extremely hard looking for and writing songs they feel will be different, yet still reflect their heroes’ music from years past.

Tim and Daniel first met in the mid 2000’s when Daniel was performing with Marty Raybon at IBMA Fan Fest. They had only a short time to rehearse before they performed their set, but Tim will always remember his first impression of Daniel: “He was the best banjo player I had ever heard and an adamant professional.” Daniel recalls that since first hearing Tim Raybon, “I have held his vocal abilities as being one of the best-kept secrets in the music business.” From the beginning they held a common bond in their love of the Osborne Brothers, Jim and Jesse, and Bill Monroe; they hit it off and have remained friends ever since.

Supported by career experiences that range from various TV and festival appearances to studio recordings to the stage of the Opry, Daniel Grindstaff and Tim Raybon have teamed up to create one of the best sounds to emerge on the bluegrass and country scene in years as the band Merle Monroe. Supported by the pristine talents of Derek Deakins, Josh Doss and Eli Johnston, their debut album “Back to the Country” on Pinecastle Records has been widely received as one of the best releases in many years!