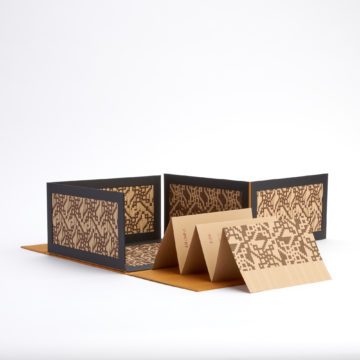 A Living Language: Cherokee Syllabary and Contemporary Art features over 50 works of art in a variety of media by 30+ Eastern Band of Cherokee Indians (EBCI) and Cherokee Nation artists. The exhibition highlights the use of the written Cherokee language, a syllabary developed by Cherokee innovator Sequoyah (circa 1776–1843). Cherokee syllabary is frequently found in the work of Cherokee artists as a compositional element or the subject matter of the work itself.

The Cherokee Syllabary is a system of writing developed by Sequoyah in the early 1800s prior to the Removal period. Through Sequoyah’s innovative work, Cherokee people embraced the writing system as an expedient form of communication and documentation. During the Removal period, the syllabary was used as a tactic to combat land dispossession. Cherokee people continue to use the syllabary as a form of cultural expression and pride, which is showcased in the contemporary artwork of the Cherokee Citizens in this exhibition.